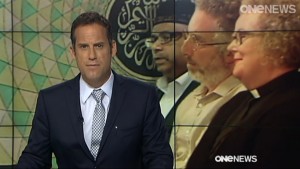 Wellington Jews, Christians, and Muslims denounce the Charlie Hebdo killings in Paris as an attack on the basic freedoms which enable us to practice our religions and coexist in a democratic society.

A prayer vigil will be held at the Kilbirnie Islamic Centre this Sunday 11 January at 3pm. All are welcome.

Wellington Council of Christians and Jews Jewish Co-Chair Dave Moskovitz said “Charlie Hebdo had published material that was deeply offensive to each of our religions. However, each of our religions holds life sacred, and there is no possible excuse for killing someone for something they have said or written.”

Christian Co-Chair Rev Jenny Chalmers said “Our thoughts and prayers go out to the families of all of the people involved. We urge France and the world to ‘turn the other cheek’, and not allow extremism to silence the voice of freedom.”

WCCJ Muslim member Sultan Eusoff added “New Zealand Muslims were greatly dismayed by the killings, which we view as counter to the teachings of the Koran. We must not allow the acts of extremists to define our religions, or sully the excellent relationships we have in New Zealand with other religions and wider society.”